Google acquired Urchin Software in 2005 to start Google Analytics. Most small websites and blogs have Google Analytics because they can’t afford anything else. Today, according to Google Analytics, it certainly does. (76% of top 1,000 sites, 88% of top 100k sites) of the site analytics market share.

As with any technology, certain features may be useful; but they can also be exploited by others for fraudulent gain. The Google Analytics system is vulnerable to unauthorized data manipulation. Users can enter their own UA identifier into the program, and GA accepts it as an authorized user. (publicly visible in the source code of a webpage). GA has documentation and is a feature that’s helpful when you want to store your data.

A security loophole leaves Google Analytics vulnerable to data manipulation, although it is still held in high regard (late last year, Google finally added Google Analytics 4 with a basic level of authentication — the use of an API key — before data can be written.) There are still some loopholes for websites that haven’t updated to GA4. This article will focus on the vulnerabilities of GA that directly affect marketers’ decisions to make with insights from Google Analytics.

Website owners often want more traffic - more traffic means "better." that gave rise to large criminal enterprises in which profits were gained by selling traffic. There’s no way to make a large group of people visit a website with such precision, even if they are bots. The traffic buyers believed the traffic was coming from humans visiting their site, so they kept buying it. There’s a lot of information about buying traffic online. It’s estimated that there are 1.7 billion total search results that you can buy traffic from with a credit card, Paypal, or now cryptocurrencies.

Sometimes, traffic sellers don’t even send real visitors. Botnets are a waste of time and money. Why bother wasting resources on something that doesn’t work? It is highlighted how GA is now being exploited — It’s been reported that fake traffic is being sent into Google Analytics, making it appear the website is getting tons of traffic when they are actually receiving little to no traffic. A demo video below shows how a simple exploit can show more than 13,000 simultaneous visitors on a site.

The fake data being entered into the Google Analytics also includes many details, a legacy of its creator. For example, the perpetrator can write any parameter like “utm_source=Facebook” and GA faithfully records that as a “social” visit. If the url contains “utm_medium=cpc” it is labeled as paid search; if “referrer=google” it is called organic search. And so on. For instance, in the video's example, social traffic is marked as "Instagram Stories", Facebook, and Twitter” even though all of it was fake; and “active pages” are literally nonsensical strings of letters and numbers, to make clear that anything can be passed into any region in GA. These are all unreal observations made in GA; no single real visit.

This technique is also how fake traffic sellers advertise their services — it’s called “referral spam.” Inbox spam is not the most effective way to reach potential customers looking for more traffic for their websites and GA is by inserting data simultaneously. The following screenshot depicts some well-known examples, such as “referrer=www.Get-Free-Traffic-Now[.]com.” When data scientists see this, they are inquisitive and visit the site. As a result of their fake traffic, some people end up as customers to the sellers of fake traffic. A quick search on google for "fake traffic sellers" will return many results. 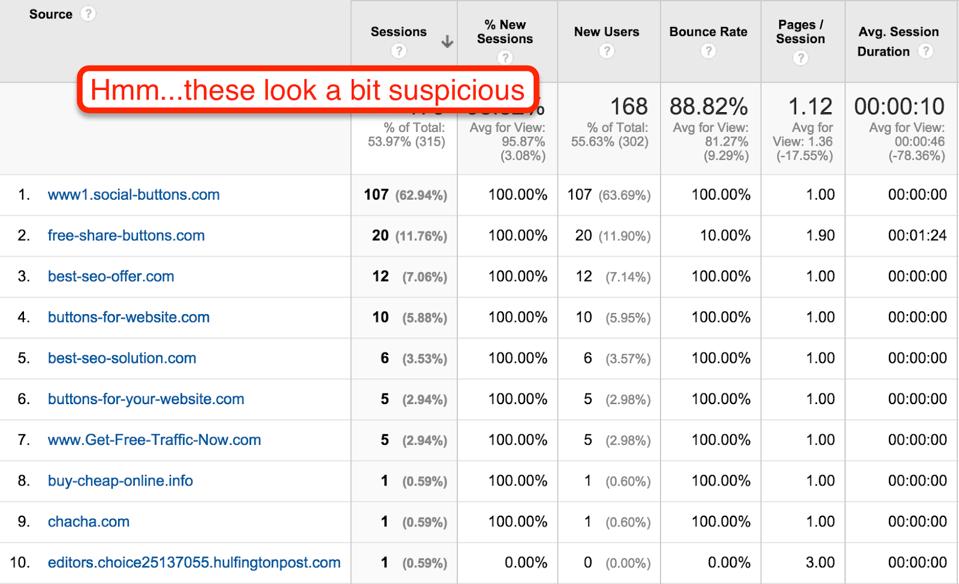 Marketers should also be aware that traffic numbers don't always accurately reflect the success of a digital marketing campaign. They need to know about this side of Google Analytics and how abuse took place. If GA shows a high number of clicks in one area, sometimes it may be from bots and not users; and some of it could be phantom traffic. Some of these exploits can remainhidden for years. But, when frauds are uncovered they have been revealed to not be realistic. For example, some marketers have seen greater than 100% click-through rates - more people visiting their site than there are advertisements. There are some sites whose click throughs haven't diminished even when the campaigns have been turned off entirely. Marketers may see a lot of traffic, but they don’t see many sales. It may be because the problem with this is.

If marketers include their campaign names and IDs in UTM codes, Visits to a website from a certain campaign can be copied and replayed to make it appear that those visits came from that specific campaign. The bots used for ad fraud click on ads at a rate of 1% to 9%. In either case, fake web traffic leads to false analytics data. This is usually enough to trick marketers into allocating more budget to those campaigns because they appear to perform well. The majority of marketers might be asking themselves why fraudsters would bother messing with their Google Analytics. Hopefully this answer will clear up that question. Therefore, you give more funding to campaigns with them.

You should familiarize yourself with. Marketers have cut waste and increased performance by tightening up their digital marketing. Some marketers moved away from paying for ad impressions, citing fraud risk. They only paid for clicks. However, the user's clicks were being faked by bots. Thus, they changed their strategy to pay for performance — advertising costs (cost per click), support installations (cost per install), or sales volumes. Nevertheless, they learned that calls could be misrepresented and logged as fraud and defamation (i.e. cookie stuffing) also ran rampant. Ad fraud is a growing problem in the industry. Affiliates are being ripped off on Uber’s platform. In one case, they won a lawsuit against ad fraud after successful litigation.

Marketers in performance may be uninformed of the fact that even though sales may not be attributed to convincing data, it is still entirely possible. No, it does not mean bots actually buy goods. The perpetrators of this type of fraud take credit for something they didn’t actually do. A common form of digital marketing is remarketing. Retailers or DTC brands use this to reach potential customers that have previously visited their website. Differently from retargeting, which specially targets ads at people who viewed a site before, It is also important to target advertisements towards people who have purchased goods through a site in the past. The objective of it is to get users to buy again, buy more, and buy more frequently. There is a hidden form of fraud in the digital advertising space. Vendors may claim credit for business they did not actually generate, which can be especially damaging when that vendor is a competitor. Why does this happen? People are able to falsify data on Google Analytics by exploiting a loophole in the system. 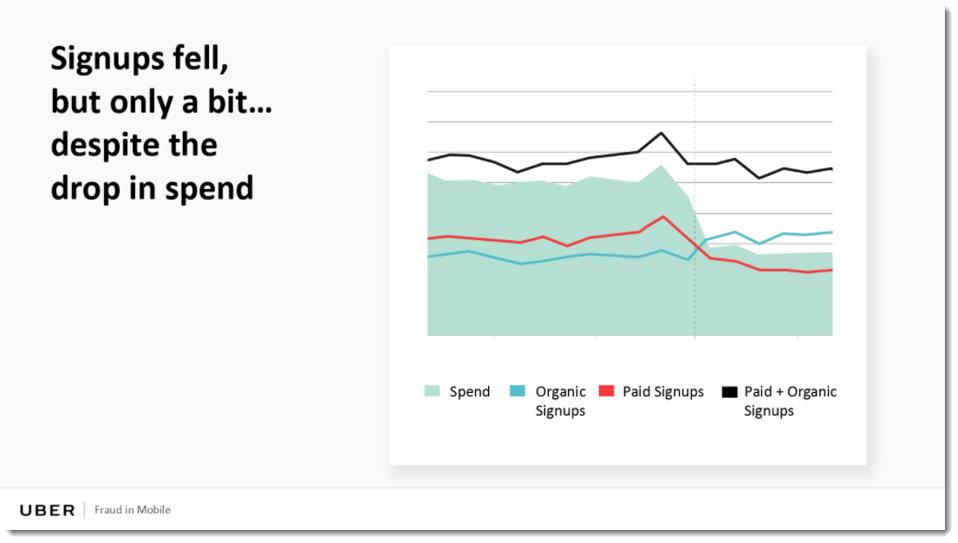 What can marketers do if they are afflicted with this? Do what Kevin Frisch, Head of Performance Marketing and CRM at Uber, does. The founder of Uber saved the company millions of dollars by discovering fraudulent activity between Uber and app developers. He paused the ad spending, and the app installations kept happening. The ad exchanges were falsely claiming credit for mobile app installations that they did not actually deliver. This allowed them to get paid the CPI (the green area is the ad spend). When the spend was paused, the blue line (organic signups) rose to the exact level of the red line (paid signups) before dropping. This data shows that the installs that were claimed to have come from paid channels were actually organic installs.

The Uber app is popular because people choose to download it, not because they saw an ad and clicked on it.). The mobile exchanges were falsely taking credit for organic installations by tricking the analytics system. The real estate company that is claiming credit for the sale of a property they didn't actually sell is the same as an ad vendor inserting false data into their own clients' Google Analytics. This is why remarketing programs perform the best among digital marketing initiatives. It seems to be doing well, just because they're hiding the fraud.

Ready to see how your visitors really experience your site?